What do you do when every pull in Virginia on the docket is canceled due to bad weather?  You go somewhere else. The East Coast pull was covered. So why not go somewhere new. It is all relative at this point as very seldom do we not see at least 5 people we know. We all make each other feel like a cast member of Cheers. So I get to the track at Mont Alto Pennsylvania, get some food, walk around, setup, and go up to the people putting the pull on and hear, "Well last week wasn't it all Mark Smith this, Mark that, I tell you what? You would have thought Marty single-handedly did everything?  And Timmy" Corey Forrester continued, "Don't worry this week's story is going to write itself. I promise you that!" And so it did! [Read Previous Article]

To the action, first time putting a camera in the Allison's Trucking Terminator sled. I realize now, it needs to be on the sled as the weight box obstructs a good bit. Greg Gress came out in the Eagle Lite and went 332.  Being that it was the first hook, they figured they would watch one more.  Shane Scott goes 332 as well.  Both of those tractors each capable of pulling 330 earnestly, they figured they would tighten it up just a hair.  How much is a "hair"?  Shane Scott came back later and pulled 326.93.

Mark Smith who was alluded to earlier in the article came next and had a monster pass going 331 but touched his rear tire to the sideline and was DQ-ed.  How Brian Yeager knew is beyond me.  But as the master of ceremonies, Brian is always on his game.  But Mark ended up with a last-place finish that would have put in the 3rd place money on this night had it been a more true run down the center of the track.

Next came Matt Smith aka "Smokey", Mark's brother who seldom gives up controls to the "Fast Forward" New Holland 8030 to his brother, was back in the seat on this night.  Matt, Fred Hoch, and Ben Flaherty are the founding members of this Interstate class.  So on this night, they pulled back to back to back.  Matt went 336.54 on the truest line right dead center down the track and worked his way to the left a tad toward the end of the track.  Next came Fred Hoch and went 324.54 on the "Never Enuff" Case 970.  Then came Ben Flaherty Jr and "Smokin' Red" and managed 333.42 feet for the second place finish. 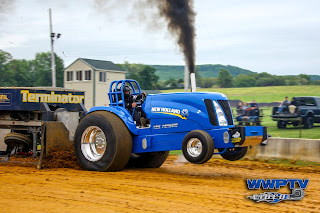 Back to Cory Forrester the article writing machine, the master fabricator, and puller extraordinaire.  Cory next on the hook came out and followed a very similar line as Smokey.  It got earned him 325.32 feet and kudos for helping give me some words for this article.  Help them out, if you are the market for anything blue, Forrester Farm Equipment with multiple locations to serve you and Forrester Lincoln if you are wanting to be like Matthew McConaughey.  Who wouldn't want that and it is not achievable with Axe body spray alone.  Might want to go with the Lincoln. 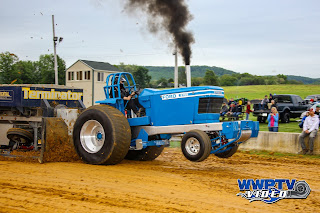 Greg Gress came back and made things interesting with a fireball coming from under the hood that stopped him at 306.  And Shane Scott and his New Holland TM130 went 326.

It was a great night of pulling only marred by the spitting of sprinkles and some of that Forrest Gump sideways rain here and there, but all in all a good night of pulling was enjoyed by the crowd which seemed into the entire event.

No one yet! Be the first and fill out the form to the left.