(Photos by Will Whitt) –  This is the largest county fair in Virginia.  It makes sense as it is one of the largest counties in America.  It is notable for one more reason, I call it home.  I make leave the county every time I travel to attend an event.  Except on this night.

To the action!  In this blockbuster event, which took me 10 minutes to drive to, you had the ever powerful Mod Street 4x4 trucks get this rolling.  William Bennett and "Buckshot", J R Rolfe and "Neighborhood Menace", and Bucky Engle and his Ford all hooked and Bucky dropped a 323 down.  Well, we haven't seen Bucky in a while and being that we didn't know what truck was capable of, a reset was ordered.  Next came April Surface on her "Endeavour" Ford and laid a good run of 313.93.  Yep, that was a good setting.  Matthew Fant came next on the "BIG Show".  If you ever saw Matthew, you would probably look and him and then around and say something like I did, "So, you're the Big Show huh?"  He pulled 308.00.  Next came Brad Broy and you might remember him and his logos all over posters, videos, you name it.  Broy and Sons are big-time clients of WWPTV.  Get your pipes cleaned, car washed, you name it they do it!  Brad pulled 324.46 and I threw some sled ride along footage in there for good measure!  Nine more pullers hooked and none bested Brad and his "Ca$h Only" Ford, I mean Chevy.  Sorry I got used to saying that from way back when!  Brad I still wear my Ford belt buckle to every event, sorry but I just do!  Roger Southard and "Memory Maker" went 315.50 for second place and Kendall Brown and "Bubba Rat" went 313.99. 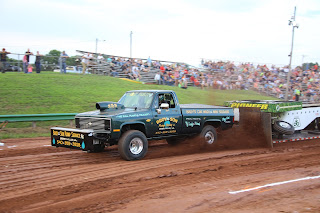 The next official class was the V8 Modified Tractor class.  What could be more awesome than popping in your favorite small block motor into your favorite tractor chassis?  Gary Coffey and "Deere Hunter" came first went 326.58 and turned it down.  There were reasons for the drop, but free pulling for ole Dub Dub!  Rocky Meadows came next on "Buckeater" and went 312.58 on his Chevy powered Oliver.  Hugh Crittendon came next and went 312.58 on his John Deere with movement from a Chevy power plant.  Class sponsor and flag bearer, not to be confused with a flag bear, for John Deere Kevin English and "The Gambler" came in and dropped some distance on everybody going 329.04.  Gary Coffey came back and pulled 317.36 for second place.  I am terribly sorry if reading/watching video led you to have nightmares about a bear toting a flag or a skeleton shooting poker chips at you.  It is what it is. 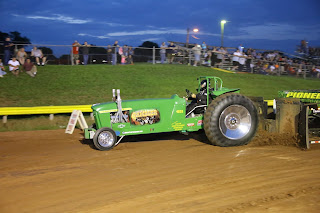 Sixty National Modified 4x4 trucks came next.  Wow, my friends, my favorites, would do anything to help these guys out.  "Put a camera here so we can watch this", "Send me my run ASAP so I can see what I need to do for 'Bowling Green'", "Just do better at videos Will!", I am used to these requests but love the fellowship with them.  I almost feel like a part of the family or team members in most cases.  John Dugan came first and was one of the first pull trucks every filmed by WWPTV when I say in the stands just about 8 years previous.  He brought his "Damage Plan" Ford to play in the dirt and did a good job running 331.91.  Questionable setting no, not with these engines.  It really was a good setting.  John kept the hook.  Next came Chad Lam and "On All Fours" and I caught Chad earlier this year on two wheels during a hook.  He went 311 and some change.  Next came Glenn Dugan and "White Horse".  Glenn has 40+ years pulling this truck.  One of the founders of the sport.  He went 306.47.  Next came "The Legend" driven by John T Davis.  He is a sponsor of WWPTV.  Looking to insure your pulling vehicle, trailer, or RV, call John T. 804-445-3823 or on the web at riverlandinsurers.com.  John pulled 331.91.  Wait!  What?  They tied.  Video evidence confirmed it and the fellows choose to split the purse.  In other notes, Mason Brizendine didn't hook due to a faulty MSD box. 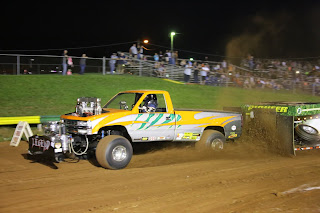 Okay, what do you do when a hometown puller wants to have his class put on an exhibition?  You get on the phone like mad and invite folks!  So that is why we had the non-Dragon Motorsports class here at Manassas.  We had 7 hooks on the night.  First off was my new neighbor Adam House and his Maserati blue special edition New Holland.  He is several hours away, but still a neighbor indeed.  Welcome to Virginia, Adam, it truly is for Lovers and Pullers.  Adam pulled some 287.32 feet and a call was going to made to help the tractors out.  I walked over and looked to Temple Brizendine and said, "This is a good hook for that tractor, let's roll with it!"  I placed him some 25 feet behind his winning tractor at Shippensburg earlier in the year (https://www.youtube.com/watch?v=7G2V94WVr7o).  Leaving the sled be was the right call.  Tommy Williams local boy from Leesburg just 20 miles away went 321.54 on "Firestorm".  Now I am feeling like a million bucks!  Randy DeVaughn and "Road Gear Farmer" went 299.80.  Jimmy Williams and "Cattellac Red" came in and pulled 296.73.  Guy Gochenour and "Stress Test" with 706 sheet metal IH went 291.90.  Then Adam House came back and went 323.76 on his "Blak N Blew" New Holland 8560.  I say it is his as he works on it but the real man behind the curtain is Gary Cubbage.  Gary knows business and he loves pulling.  Don't know about long walks on the beach, but that doesn't really matter to me as I live for 300 foot walks on a sandy-clay dirt track.  Jimmy Williams came last on "Green Max" and pulled 313.04 for a third-place finish.  Thanks to all the pullers and fans who came out!  See you next year baby! 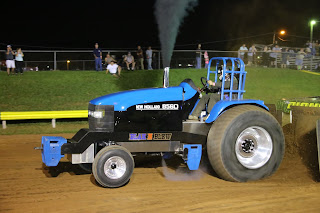 Mystery in the Mountains

No one yet! Be the first and fill out the form to the left.