Recap This International Gets a Big Win at Front Royal

(Photos by Will Whitt) –  My first time at Front Royal to film.  I generally get nervous anytime I film where I haven't previously filmed.  I just do.  Where do you set up, what do you have to shoot over, Who can be in the way, will the lighting be halfway decent.  I will shoot my setup from start to finish just so you know what is involved.

On this night I drove just 45 minutes away to get to my racing fueled destination.  I set up my camera 3 different times.  Note to self, "It only takes you 15 minutes to set up.  Chill dude!  If you get there an hour and a half early goof off for an hour and 15 minutes."

To the action. I have been helping promote, legislate, push sponsors, carry brands on my back trying, begging, pleading, to build up the banner for Super Pro Farm in Virginia.  It is very powerful characters pulling equally powerful tractors.  They weigh 10,000 pounds can run cut puller tires, 540 cubic inches with a P Pump.  "Yeah baby, Grrrr!"  On this night, I want to focus on one man.  I design a set of banners a while back and they were so good, everybody wanted them because it had them on it.  One of those banners had a sponsor of our league as well as WWPTV.  He wanted it so bad that I said, "Let me clean it and get it back to you."  He said he wanted it just as it was.  Chad Nesselrodt runs Big L Tires based out of Harrisonburg Virginia.  We came up with a deal for you the fans, go into any one of the 6 Big L stores mention WWPTV and get 5% off your bill.  Chad is that kind of guy.  he is willing to give back to the sport.  He sponsors Dragon Motorsports, the Super Pro Farm class, as well as the Keystone Winter Nationals.  So on this night, Chad pulled first in his "Recap This" and went 274 leading to a Reset and Chad dropping to the back.  E L Harlow came next and went 294.44.  That was better.  Then came the Blue Power!  Adam House went 283.92.  With the fair drop behind the action, Adam Ritchie took "Pap's Blue Ribbon" 296.06 feet down the track.  Track Blazing Billy Rice came next and hopped his way down the track 307.43.  Now we are cooking baby!  Adam House came next on Blue Force and went 289 and some change.  Donnie Gochenour came next and went 298.48.  Adam Ritchie came back and went 303.34 on "Blue By You" his second Ford 9600.  Then came the bull.  Yep, everybody is watching to see what Thurman does and on this night he took the "Mechanical Bull" 306.27 feet from where he started.

Back to Chad.  he came back and picked it up and laid it down.  He powered his way 310.47 feet before John Nicol flagged him at the end of his run.  Sidebar, John is one on the best end flagman I have ever seen or heard of.  Too bad he is equally good at announcing.  Chad took the night's event and helped to build on the reputation of this class as being one of the toughest around. 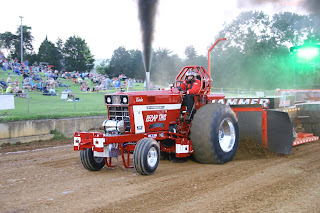 I want to say thanks to Chad for all you do for pulling, me personally, and for the ever powerful Super Pro Farm class!  Be sure to go see him at Big L Tire in Harrisonburg at the I-80 location.  Like the name of the tractor implies, "Recap This", "He's just capping 'Tars!"