(Photos by Will Whitt) –  I have been to a lot of pulls in my young age.  I started going since I was a kid in Alabama.  I grew up watching a several Allis Chalmers that were Kings of Dirt down there.  It never left my memories.  I grew into other things, computers, faith, and general hanging out that didn't revolve around pulling.  I got back into and big-time back in 2012.  I have been filming ever since.  In the 300 plus pulls, I have never seen the local domination that was on display during the middle of August at the Clarke County Fair in Berryville Virginia.

On this night I drove just 44 miles away to get to the fairgrounds.  I am familiar with this place.  I have wear patterns in the landscape and I try to vary it slightly from pull to pull.  Sometimes I want to be higher, sometimes lower, sometimes I want to just see more rear of the vehicles.  And who doesn't love a good rear end?


To the action. Before we get crazy with distances and speeds sure to get you a ticket downtown just a few blocks away, let's talk about future generations.  I figured I have done my part as my 3 are on the level and highly talented.  We are awaiting a pulling budget before going crazy into the sport I love.  But some kids have access now.  And we are seeing it bigtime these days.  We see local pulling stars like Courtney Mercer and her "Barely Legal" Chevy which is a play off of her age, beauty, and legality of her pulling truck that is sure to infuriate the rule hawks in the sport.  Then you have young Mason Brizendine and his Cutloose truck that is a play off the Footloose truck name that has made birth out of Millers Tavern Virginia many times and many times more!  This day showed us several kids in big tractors.  Sure dad may have hooked it up to the sled.  But it is still impressive that a kid can keep it straight and hooked up for 300 plus feet.  And that is what happened.  Seven-year-old Chase Henderson took his John Deere 8320R equipped with row tires all the way down the track.  He went 327 and some change which would help to break in this green track.  Note to promoters this is a good thing to do to help.  At Winter Nationals in Gordyville Illinois in January, they go over all three parts of the track.  Another young fellow, who must have been 8 or 9 years old, came next in a New Holland 7050 and ended up 288 feet.  Pulling is in good hands going forward. 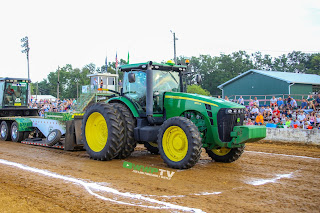 RWB Diesel 4x4 trucks means Run Whatcha Brung and bring a friend in case you break.  On this night we saw a lot sputtering and breaking.  The announcer said, "This class is sponsored by your local auto parts store with a special on U joints"  It wasn't but if you are putting a pull on that is an easy sell.  A green dodge turned out to be the sleeper in the class and went 306.85.  Tyler Franz from Berryville went 302.62.  A few hooks later came a work truck driven by Chad LeMasters that went 308.26.  He dropped a drive shaft but left with the top spot at the time.  Two hooks later Bobby Franz also from Berryville hooked up and went 332.32.  Berryville native winner number one. 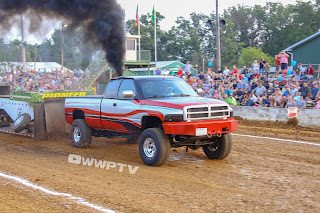 Next was a Super Stock Diesel 4x4 versus a National Modified Sportsman 4x4, read non-HEMI power plant.  The Simmons Brothers brought out their latest truck, Foolish Pleasure and went 317 feet.  Next came Jeremy Denson and his "Too Disturbed" Super Stock diesel.  We have filmed this thing about 3 or 4 times over the years and it has never really hooked up to the build level it is capable of.  On this night, Jeremy started out his first attempt didn't like it and backed out.  Then on his second attempt, he let the big dog eat!  And eat up the track it did.  It went 334.63.  Winchester/Berryville native winner number two.  Winchester is just 15 minutes away, so he's gets my kudos. 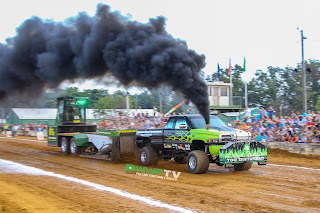 Ricky Tavenner holds the banner high for Case IH in the Light Limiteds and Light Pro Stocks as we run them in Virginia.  Ricky hales from Berryville and he drew the luck of the night.  First and earlier hooks seemed to be the winning hook number for this event.  Pullers get to roll a lottery style cage with numbers and the lowest one goes first.  Ricky took his Case IH MXM175 some 328.54 to start the class.  The next hook was another Ace Chassis from Mike Stinson just outside of Nashville Tennessee in Steve Flint and his "Headcase" Case IH MX285.  Steve likes his tractor a little bit nose heavy and on this night it managed a distance of just 304.88.  I never take phone calls during pulls.  Well, there was this one time when my wife called and said, "Get home, a tree fell on our house!" and on this night I received a call from a few pullers from Pennsylvania that said they were going to be late.  The pull was an hour earlier than in years past.  But still, I asked the promoters what they wanted to do.  "Get em in here and unloaded!"  So they show up, unload, fuel, and safety up themselves and get in line.  The line didn't help them on this night as the pull order was decided already.  Ted Ingram came next as the Blue Pullers from the north were driving into the pits.  Not deterred by them, Ted went 312.63 on his "Acme Rocket" Ford 9600.  Parran Bean came in on his "All About That Allis" Allis Chalmers D-21 and went 313.69.  A very solid run for the pumpkin.  Shane Scott from Shippensburg Pennsylvania came in on a New Holland TM130 and went 314.70.  He's buying dinner for that team as it would land him a second place finish.  The brothers from the north Matt and Mark didn't have their normal nights and I think it was due to the late placement in the running order in combination with their weight being less than optimal along with the stresses of arriving later than expected.  Mark lost his smokestack clamps and let smoke out all over the place.  So there you have it Ricky makes Berryville native winner number three. 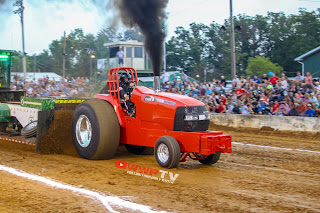 One last class to write about on this fair week.  The 6250 Mod Street 4x4's is a class that has some ups and downs.  They have been as strong as fifteen and as little as five at events.  But these days, it is one of the better classes to have in from promoters as there is a lot of color, several makes, models, and great names and colors.  My favorite pulling truck going is a 65 Ford and Jason Griffith got this class started with a matte black version going 311.68.  Bucky Engle came next and went 309.  Berryville native Howard Cleaver messed up his front end and went some 25 feet.  Too bad it has a sweet shine job on it.  Next came the Virginia Redneck who went 322 feet and some change.  His wife April came next on a similar Ford called "Endeavor" and went 323 feet.  Girls rule and this one gets to sit at the head of the table!  Next came West Virginia native just up the road Colin White and his "50 Cal" Chevy painted up like an assault version of the "Fall Guy" truck with excellent ghosting graphics on it and a ammo wrapped weight box.  Colin went 328.49 on the best run I have ever witnessed him lay down.  Bubba Rat Kendall and Robert Brown came next on their Chevy and went 329.30.  Then came Brad Broy on his "Ca$h Only"  Chevrolet.  Brad pulled his Lee Edwards powered truck some 355.42 feet to take the win home.  Brad concludes the fair and was Berryville native winner number four.  Wow, what a pull. 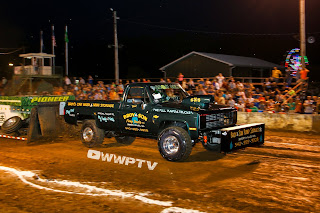 I want to say thanks to Clarke Couty Fair for having me for the Car Show, their first annual, the Fair Pull, and a big shout out to Brad Broy of Broy and Son Pump Service.  Thanks for all your help and consideration.  It makes filming super easy when you have great partners to help promote the sport and keep it thriving for future generations to come, enjoy, and participate.


Keep on following WWPTV and liking and sharing for more great content!