(Photos by Will Whitt) –  I drive about 7,000 miles a year to get to events you all are so eager to watch, comment on, and share.  It takes a tremendous amount of effort to get to these events.  None more difficult than going through the mountains to get to Monterey Virginia.  If you wanted a good business in that valley, sell brake pads and rotors.  You would make a killing on parts related to traveling to and from.  It is 120 miles by the crow and 190 by vehicle.  And since WWPTV doesn't have the subscribers of big TV conglomerates, we drive.

On this night I got to the fairgrounds and my regular path was blocked.  A few words of kindness and "I usually go through here to get to where I need to set up" and I was in.  Very friendly people in the valley.  I am becoming very familiar with this place.  On this night my electronics was messing up the sled electronics.  It is what we have to deal with.  We will not be buying any TV Trailers, or Wi-Fi extenders, or Remote Satelite dishes for Live Streaming purposes until this matter gets resolved.  WWPTV subscribers will get the latest action as I can get it edited.  Sorry for future Live Streams, it is a deck that is just stacked against me.

To the action. A young man came up to me and said, "Hey I was wondering if your are going to put that on YouTube?"  I mean, "Yeah that's kind of my thing!"  He said, "Well yeah I won tha class and everybody says you are the best and I want to see it!"  I said, "Thanks and we will get it up there eventually."  The 7500 Farm Wood Truck class is just that as the name implies.  That fellow was driving a white Chevy and I was like, "This is awesome!"  A while back one of these trucks came to a bigger pull, hooked up, pulled a good distance down the track, and dropped a snake on the track!  A puller went over grabbed the thing and flung it into the grass near the fans, people went scattering every-which-a-way but near that dang thing!  So Bobby Hoy is that Chevy driver that came up to me.  He watched pullers go 223, 225, 217, 103, 196, 221, 221, 238, and 266 feet.  So Bobby comes last due to some TV magic and has the loudest run in the class.  He went 245.78 to take this Wood and Farm Truck class.  It was the first time I filmed it.  Bobby even wanted me to take his picture with his kids and his shiny new trophy!  Congratulation Bobby Hoy.

Allison Bennett was just 14 years old when she started pulling.  And if you didn't know the Bennett family loves their Fords.  I remember a story of one of the Mountain Boyz staff telling me, "Yeah it was rough the first couple of times down the track, but it only took a few times before she had it down pat.  The Mountain Boyz league has several Mountain Girlz that hook up to the competition pulling sleds.  Allison piloted her beautiful blue and silver Ford with those West Virginia plates on it.  There was no placing her run a the end of the video for effect.  She went 291.90 and held on to it the whole class.  She dodged a big bullet by Meagan Grimm and her Chevy going 290.79.  The Grimm family show up to events with about a half dozen trucks I say jokingly.  They have a few that make several hooks.  The Grimm family is similar to the Bennetts in that they represent the Mountain Boyz very well.  Allison also dodge bullets from Taylor Perry, Michael Simmons, Sop Hull, Ben Willhelm, Stacy Bennett, Chris Snyder, and Ben Schooler.  Allison took her Ford down the track and made it work for the win on Truck Night. 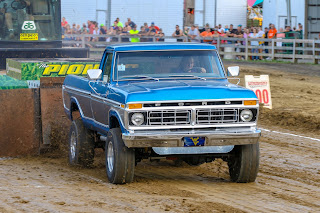 Butch Self and Davin Brann travel the spider webs of Virginia highways, and back roads to put on killer shows for fans.  They hooks several times for their fee and they get the fans hooting and a hollaring like nothing I have ever seen before.  On this night Butch hooked 4 times!  I sat down and had breakfast with Butch, Davin, and Temple Brizendine the next morning.  I asked Butch if 4 runs was okay.  He say it was a engine that he took to to a slightly larger size in the 500 cubic inch range, but that it wasn't any high dollar performance specific add-ons that need pampering.  He wanted to keep it as stock as possible for this very reason.  You and I both know these guys go through drive shafts more than any other part on these vehicles.  Butch cranked it up and the announcer was like, "Wow!  Wow!  Ford guys scream for this guy right here!"  Later in the night they had a kid announcer that said, "Scream Load!"  The Butch stood on the throttle and went half way down the track which lead to the kid say, "I like that!"  Butch began coming around in 2017 with his 1971 Ford Explorer.  The Self family as Temple told me just showed up a few years into him hosting pulls at his Millers Tavern track, "Hey, do you mind if we hook up to the sled?"  Temple said, "Well, I don't see why not!  They put on such a good show!  The crowd went nuts!  And we have been doing it ever since!"  These two will pull with an occiasional 3rd puller that alternates from region to region.  There are several more of these being built/rebuilt for this very purpose.  It just takes time.  So we don't really have a winner per se, but Butch tends to do awesome wheelies while Davin like a good mix of distance and wheelie pop in the middle and a slightly bigger one toward the end of the track.  So as on now we don't have smell-o-vision, but if you are drinking grape sode while cranking these videos up, you are pretty close to the child-like I get the honor of having eveytime these boys come around. 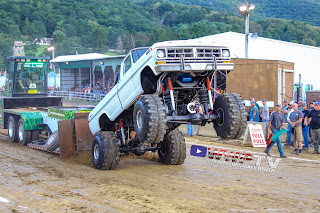 Wyatt sours has pulled the Wa$ted Wage$ truck for a good long time now.  Longer than I have been around that's for sure.  They say black vehicles are harder to take pictures of and that is true.  Just keep that in your memory for future reference.  But when you add an edge of orange over the rear of the bed and some metallic letters, it helps.  And this vehicle has a good amount of chrome, so it has the makings of a vehicle that is very easy to chronicle.  Wyatt passed this puller on to his son Clayton at the onset of the 2017 season.  Clayton and this truck has been at/near the top of the National Modified 4x4 class for a good long time.  If there is a points pull, they will be there.  This wasn't a points pull, but they wanted to come out and help out the Mountain Boyz.  On this night that truck was moving, so much so I could only get a few shots in.  It went the fastest of all pullers on this night.  It was moving 28.3 MPH.  Clayton surpassed Aaron Smothers as he came first and went 321.95 and 26.9 MPH.  Chuck McQuan and Hard to Handle also hooked up and pulled the sled 313.64 and the same speed 26.9 on the 9 foot uphill track.  Congratulations to these pullers and continued success on the rest of the Dragon Motorsports Sportsman season.  Thanks for helping the fans get used to what is coming to the Mountains! 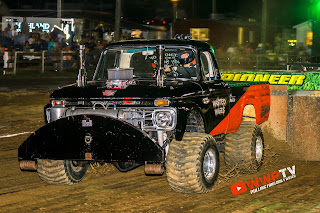 I want to say thanks to Mountain Boyz for having me out and putting me up for the night.  Their hospitality is second to none.  Check them out on the web at http://mountainboyzmotorsports.com.

We created our first Women's Tee.  It is introductory priced at $18 a shirt.  There is also a standard tee for the guys and mug for all my coffee and tea drinkers.  If you really like what, we do, help us out.  https://www.gearbubble.com/gbstore/wwptv 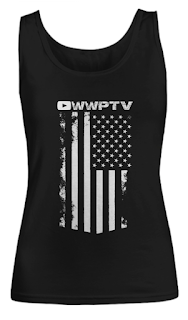